The group stages of Tokyo 2020 are complete, and they’ve been exciting. Exactly half the games (12/24) saw three or more goals scored, whilst 10 games have had both sides score – per game, the goals average is 2.83. Given there are five Olympic rings, it only seems right that we pick out five standout players from the group stages.

Olympic football is fitting for those invested in under-23 football, as men’s teams are only allowed 3 over-age players (24 years plus) in their squads; given the year delay of Tokyo, the threshold was extended to 24 for this Olympics only, in order to allow those to play who would have been ineligible due to the unforeseen circumstances.

The Japanese attacker has well and truly stepped up to the plate in his home Olympics, netting in the opening goal in all three group games to ensure that his country topped their group with the maximum number of points. The host nation are the only to achieve this feat, and no under-23 players can better Kubo’s clinical return of 3 goals. 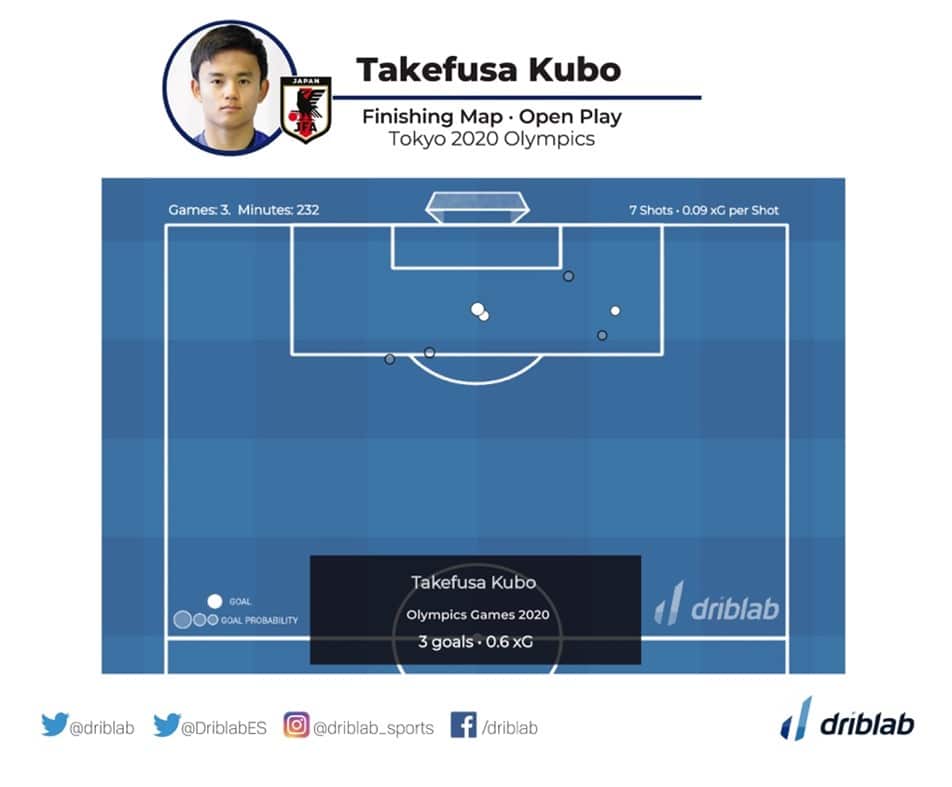 His shot patterns are fairly varied, having four attempts from free-kicks, whilst also shooting following combinations with team-mates and dribbles. Kubo is a really good dribbler – 10 dribble attempts in 3 games – often slowing the pace when he receives the ball to freeze a defender, then accelerating away. He uses his shoulders well, too, jinking left and right to unbalance his opponent and make it easier to get past. He showed this with his winner against South Africa, where he cut inside from the right before firing into the bottom left corner after receiving a switch pass.

His ball-striking technique is equally as good for one-touch finishes as it is from multi-touch shots (often seen following a dribble). His strikes against Mexico and France were both first-time finishes from around the penalty spot, though the latter was a laces finish from a shot rebound, whilst the former was a sliding shot as he made a late run for a cutback from the right.

Operating as a pivot player, the Brazillian has shown his class when playing into the final third, often receiving from the backline in the second phase of build-up, when faced with an settled opposition structure. Guimarãs is capable of playing early forward balls when he receives on the half-turn, though he is more than capable of – and prepared to – carry the ball in order to change his passing angles or engage opponents out of their settled shape, in order to open up new lanes to team-mates.

He is more than capable of splitting the back-line with a killer pass, having attempted 9 through balls, and typically plays such passes inside the full-back, with Brazil’s wide players running in-behind – his assist for Paulinho against Germany saw him take 7 opponents out of the game.

That said, there are times where he will play less risky passes to the feet of Brazil’s wide outlets, and often he supports these forward balls with penetrative underlapping runs. Brazil only edged their opponents in terms of possession share, they have outshot them collectively by 56 shots to 17, and the South American outfit have created the most big chances (15) of any nation at the tournament.

Guimarães’ countrymen are exceptional in the attacking department, and the OL midfielder can be delicate as well as destructive with his deliveries into the forwards. He boasts a penchant for an outside of the right-boot pass, and even cuter was his assist for Richarliason against Saudi Arabia – a cushioned header back into the box (corner had been initially cleared) that lobbed the defence as they stepped out, bypassing 8 opponents.

It may seem surprising that a goalkeeper to concede seven goals in three games makes this shortlist, but had it not been for Florian Müller’s ability between the sticks, Germany may have not finished the group stages with four points.

He faced 21 shots on target in just three games – which averages out to be one less than every 13 minutes – and saved 15 of those, giving him a save percentage of over 71%. 10 of his 15 saves came from shots inside the box, further evidence as to how leaky the Germans were defensively. You’d be mistaken for thinking Muller was just a line goalkeeper, as the 23-year-old shot-stopper completed 108 passes, with his per-game average (36) the fourth best among German players, whilst the ‘keeper completed 90% of his distributions.

Against Brazil, Müller saved a Matheus Cunha penalty to prevent his side going four-nil down before half time, and he saved an immense 10 shots that game (8 from inside the box), making a further 3 punches from crosses and 4 clearances, whilst completing 40 passes

Alexis Vega has already scored and assisted at these games. The 23-year-old tops his country’s charts for shots (7), shots on target (5) and key passes 6). Accounting for his minutes played (he has been subbed in all three games), Vega is directly involved in a Mexican shot every 17.5 minutes when onfield, and he has been involved in almost 32% of Mexico’s attempts.

Similar to Kubo, Vega operates on the ‘wrong’ side of the pitch, playing on the left as a right-footer. Whereas the Japanese is a silky, smooth dribbler, Vega is a lot more rugged. He does boast speed in abundance, and if he can get into a side-by-side foot-race with a defender then he will most likely beat them.

When they are directly between Vega and the goal, the Mexican struggles more, and could refine his ball manipulation skills and (alike Kubo) use his upper body to try and unbalance defenders more before attempting to get past them. That said, his physique is a useful asset, and Mexico have used him to pin defenders in order to receive passes to feet, and Vega is skilful enough to spin players on the turn, and can actually play passes as he spins quite well.

His attacking output is certainly the best of any player in this piece; he takes set pieces for Mexico, and has created chances through out-swinging corners from the right, as well as free-kicks. In open play, the chances he creates are often not of the highest quality, and he is probably a better converter than creator; incredibly strong as a one-touch finisher with both his head and right-foot, Vega’s two goals have both been first-time finishes from between the posts, scored against unorganised defences, as Mexico have hit teams incredibly well on the break.

We’ve seen plenty of the attacking talent already in this piece, but South Korean Seol Young-woo had been a defensive rock. He missed the opening group game, but his all-round defensive ability is quite possibly unmatched. In his two games, he completed 88 passes (7/14 long passes), won 10 of his 11 ground duels, created 5 chances and recorded 8 clearances plus interceptions.

Of course, modern full-backs are required to do more than defend, but Young-woo Seol does that exceptionally. Operating on the right of the South Korean back four, he tracks runs of wide players dropping in incredibly well, not allowing them space to receive and turn, whilst also showing immense control and restraint for knowing when to use a front foot poke tackle to steal the ball – he has won all 6 of his attempted tackles in the two games he has played. When facing a dribbler, he spins his hips well to show them away from goal, and uses cross-stepping techniques well to match their foot patterns and keep them close. It seems unsurpsing that South Korea have kept clean sheets in both the games he has featured in, beating Romania and Honduras by a combined 10 goals-to-nil.

His acceleration and speed enables him to duel well not only defensively but as an attacking threat, too. He has primarily troubled the opposition full-back with penetrative runs inside them (underlaps), which is the exact movement he made to receive a through ball before cutting it back to assist Jin-ya Kim for Korea’s fifth against Honduras. Against Romania, his underlapping run kept the opposition full-back pinned narrow (to block a through ball into Seol) and maintained the crossing angle – Romania’s Marius Marin diverted the cross into his own net.

In-possession, Seol stays high and wide, pinning the opposition full-back and receiving from both central defenders and the pivot players; his aerial control is particularly impressive, as he routinely brings balls down out the sky using one or at most two touches, facilitating quick attacking play for South Korea around the opposition defensive block. Seol isn’t all-risk in possession though, and showed maturity to play sideways and backwards passes to game manage in the demolitions of Romania and Honduras. 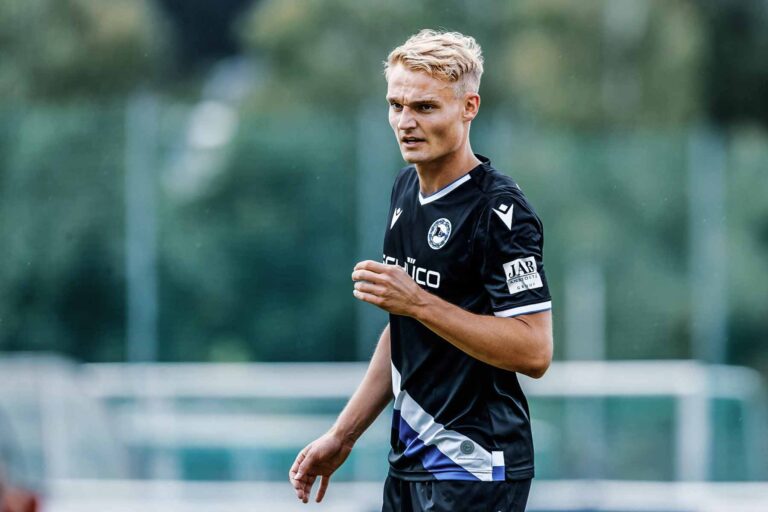