Who is Amos Pieper?

Amos Pieper is a Borussia Dortmund academy graduate vying for the black and blue colors of Arminia Bielefeld in the Bundesliga. He joined the then-Bundesliga 2 side in January 2019, after spending half a season with BVB’s senior squad, earning little to no gametime. A year and a half later of consistent minutes week-in week-out, Pieper is once again being linked back to a side situated at the top of the table.

72 appearances with Arminia has captured the interest of top clubs across the continent. RB Leipzig are the prime candidates, a side who are looking for a capable alternative to Maxence Lacroix if they can’t come to an agreement over the Frenchman’s transfer fee. Also interested are Tottenham Hotspur, who under Nuno Espírito Santo are attempting to rebuild an ageing centre-back partnership. But on the eve of the Bundesliga season, it seems unlikely that he’ll leave Arminia.

Let’s take a look at Pieper’s impressive physical profile for a defender. Standing at 6’4” and weighing in at 86kg, Pieper is a difficult defender to escape when an attacker is within his figurative grasp. He makes for a gangly build, and it is one that is not entirely conducive with speed. Pieper is amongst some of the slower centre-backs in the German top flight, not debilitatingly slow, and nowhere near Per Mertesacker levels of sluggishness, but he is not quick, nowhere near.

Arminia under Uwe Neuhaus played a plethora of different formations last season, but most frequently were a 4-2-3-1 or 4-4-2 deployed, dependent on the opposition. In either system, Pieper would partner Joakim Nilsson, who acted as a good fold to Pieper’s lack of mobility in the Bundesliga, and a good Bundesliga defender in his own right. Of the two, however, Pieper was the one to step out of the defensive line and intercept opposition attacking interchanges, while Nilsson would cover the space vacated behind.

Which moves us nicely onto Pieper’s skilled pressing abilities. Whenever a direct ball is played into the opposition’s centre-forward, either from a goal kick or defender, Pieper typically moves out to apply pressure into the back of them. His aim here is to beat his man aerially, but a secondary benefit of his size and stature is that it frequently forces his opponent into making a passing error, which can easily result in a turnover of possession.

In other situations, when the ground pass is played into the feet of an opponent in front of Pieper, the 23-year-old does well to apply pressure and use his long legs to nip the ball from underneath their feet to win back possession.

A 42.6% successful pressure percentage is high enough to sit in the 97th percentile for centre-backs across Europe’s top five leagues in the last 365 days. It compares favourably to elite Bundesliga defenders such as Mats Hummels (37.2%) or even Maxence Lacroix (36.1%).

When through passes are played by Pieper’s area, he typically deals with the well, despite his lack of speed. He reads attacking situations well, and this enables him to position himself in the right space to either keep pace with a pacey attacker, or to step in early and win the ball in the process. This can occasionally lead to moments where Pieper steps towards his opponent, and they glide past him, which is potentially dangerous for Arminia when that happens.

In 1-v-1 defending scenarios, Pieper remains amongst the Bundesliga’s best. Again, his positioning helps tremendously in winning the ball back for his side when an opponent runs at him directly. He has a good appreciation for his lack of pace, and as such, he times his moments smartly as to when he should step towards a ball-carrier to come away cleanly with the ball. For Pieper, it is less about putting in a pronounced tackle, rather he tends to simply move in between the player and the ball.

Against dribblers, Pieper comes away with the ball 53.3% of the time, which sits in the 72nd percentile against the same metrics we mentioned before. In certain 1v1 scenarios, Pieper excels, such as ones where the ball is played directly into the feet of an opponent, where the German can time his movement to separate the ball and his opponent promptly. However, when Pieper is dragged into a wide area versus an agile winger, he struggles significantly.

In the only time that Arminia utilised a back three last season, matching up against Borussia Dortmund, Pieper was foolishly used as the right centre-back, responsible for defending against Thorgan Hazard, Marco Reus, and Jadon Sancho. He easily looked the worst defender on the pitch that day, as he was consistently easy to create a yard of space against to create goal scoring opportunities down the half-space. He lacks the requisite mobility to defend capably against wingers who thrive in 1v1 dribbling scenarios.

Pieper also struggles in the air – which is striking for a defender so tall. He only wins 52.9% of his aerial duels, resulting in 2.72 won per 90, but also losing out on 2.45 as well. This is poor for any centre-back, but inexplicable for a 6’4” defender who should be winning at the very least somewhere in the 60-70% range. Pieper seemingly struggles to generate the necessary height on his jump, on top of his timing being, on the face of it, entirely off-tempo. He struggles especially to deal with lofted deliveries that have a bit of pace struck behind them, and slightly less so with slower crosses that he can anticipate and leap ahead of his opponent.

An area that Pieper largely does not struggle in is his passing. Only keeper Stefan Ortega was completing more passes per game in the Arminia squad than Pieper’s 50.7, indicative of the German’s importance in their build-up play. When judged against other Bundesliga centre-backs, Pieper sends a proportionally high number of his passes long.

His short-medium passing is stable, he generally deals well with pressure and has the ability to jink his body into a passing option. Occasionally though, he can play short passes right into the feet of his opponents, and it is these lapses in concentration that need cutting out of his game.

His long-range passing is where Pieper excels. He attempts a high 16.24 long passes per 90 at a 71.9% success rate, which is reasonable when we consider the volume of these efforts and how reliant Arminia are on these passes to turn defence into attack.

A majority of these efforts end up on the head of club captain Fabian Klos, who is a domineering physical presence, and just as equally vital to Arminia’s attacking play. Pieper’s approach to his long-range passing is measured, he oozes a confident aura in these efforts, which is certainly a positive.

Forecasting the future for Amos Pieper

Two clubs, RB Leipzig and Spurs, are reportedly the most interested in Pieper’s services. Potentially, if Leipzig do secure Lacroix, Wolfsburg could look to Pieper as a replacement for the Frenchman, which would equally be an upgrade for the German as Leipzig or Spurs would. Of all three clubs, Wolfsburg would perhaps come closest to Arminia’s system and style of play, where Pieper has performed so well.

Transfermarkt rates Pieper at €7 million, and with his contract up at the end of the upcoming season, a fee somewhere in that region would be enough to purchase the player. At 23 years old, he has already shown an ability to make the smart move for his career, dropping down a division on his way back to the top. As is, on the eve of the new Bundesliga season, it’s unlikely that he’ll leave Arminia.

In future, it is about making sure he joins a club that gets the best out of his strongest abilities. He is a player with some noteworthy drawbacks, and any club interested in buying him needs to take that into consideration. What they would be purchasing though, is a strong, ball-playing defender, who can deal capably with 1-v-1 scenarios.

What are Amos Pieper's strengths?

Pieper is a strong passer from deep and is an impressive defender who does his best work through good positioning.

What are Amos Pieper's weaknesses?

Considering his height (1.92 m) Pieper struggles in the air. His height also limits his speed across the ground. 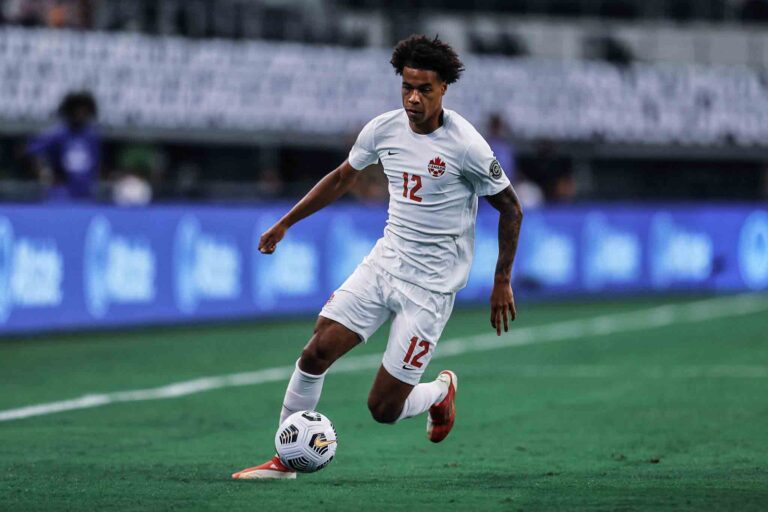